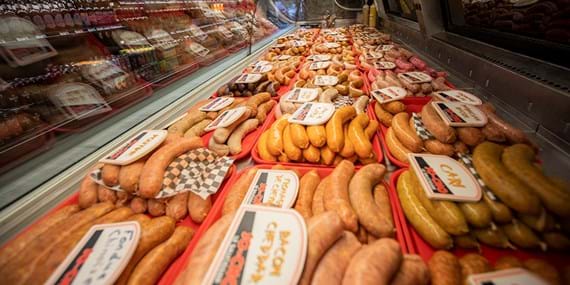 So Cho is sought after by those in the know for the eye-popping variety and uncompromising freshness of their sausages.

With an impressive resumé in the food industry under his belt, Roger St Cyr launched So Cho in the Old Port Market in 2005. He named it So Cho for the food he served: sausage and sauerkraut (choucroute in French).

The Old Port location was so successful that Roger decided to expand in 2009. He opened a second location in Complexe Lebourgneuf, adding a show-stopping selection of more than 200 Québec microbrews. A third location, in Sainte-Foy opened its doors in 2013. The fourth and the fifth So Chos opened inside two Le Monde des Bières stores in Neufchâtel and Saint-Nicolas. Now that’s a thriving Québec City chain!

Roger’s son Guillaume and daughter Fannie have since joined the business, bringing new energy and enthusiasm to the venture—a family success story that’s sure to keep on growing!